I have a confession. After 39 years, I figure the statute of limitations has well and truly expired. I also think that my co-conspirator Sarah Dawson is unlikely to read this, so it is safe for me to finally spill the beans.

Sarah Dawson was my dear bestie back when we were 10 and 11. Our friendship had a joy and certainty that thrives in that brief period before adolesence and adulthood complicate things. We were in love with the possibilities of the world and entering the final year of primary school. We were at Campbells Bay Primary and it was 1981.

It was a time before that beachy place on Auckland’s North Shore lost its semi-rural innocence. Those were the golden days, when us kids could wander parentless to the beach, knowing neighbours would keep an eye out as we paddled in the tame waves. It was a time when Campbells Bay still basked in a 70’s hippy vibe, not anticipating later reports from a neighbouring commune that would sour what was left of the seventies counterculture.

Of course, BFF Sarah and I were oblivious to all of this. In February 1981, we were consumed with the excitement of entering Standard 4, the pinnacle of our primary years, that was signalled by our classroom being at the top floor of the senior block, from where we could observe the world below and make wise and witty commentary.

What made Standard 4 even better was that our teacher was the lovely Mrs Anderson, a woman noted for her kindness and forbearance.

It was Mrs Anderson who encouraged Sarah and I into our ‘no talkathon’ during that year’s Telethon. We had considered a range of ideas to raise money for Telethon weekend, but it was the ‘no talkathon’ that particularly appealed to Mrs Anderson. She thought it a fine idea and may have even contributed to the undertaking financially. Certainly, many other adults we knew seemed happy to chip in 5 cents for each hour of silence that Sarah and I bravely completed.

We undertook our 24 hour challenge on a day preceding the national celebration.

Sarah and I had made it through the first couple of hours without a hitch and were lining up at the end of morning break, when all our hard work was suddenly thrown into jeopardy by the advancing principal.

To we students, Mr Holland was a remote, terrifying man who occasionally emerged from his office to call out to individual students as either ‘Laddie’ or ‘Lassie’. Now he was suddenly talking to me for the first time in almost 5 years.

“Lassie, did your brother get home okay?” he barked.

The previous afternoon my little brother had been late coming home and my mother had rung the school to ask if he had been kept in. He had not. He dawdled in shortly after the phone call and now Mr Holland, who was obviously unaware that I had taken a vow of silence in support of our nation’s disabled children, was placing me in a very difficult situation.

I looked at Mr Holland, nodded in affirmation and tried to look wise. I hoped this would be enough of a response.

Instead he became infuriated and shouted, “Has the cat got your tongue Lassie? Speak up!”

There was nothing else to do. I spoke the words that confirmed my brother had indeed returned home the previous afternoon and the principal walked on.

I was immediately mortified at what I had done and rushed up to Mrs Anderson to tell her the non-talkathon had been ruined. She suggested that we continue as planned, but add some extra time to the 24 hours of silence, to make up for my transgression. Mrs Anderson was a clever woman. We adopted her strategy.

Sarah and I were inseparable that wonderful year. Together we signed up to be monitors, furthering our commitment to community and service, while coincidentally enjoying the personal benefits that came with the roles.

As library monitors we got access to the new books before anyone else did and we thrived on feelings of self-importance as we did crossing patrol. In unison we would rhthmically chant: “Signs up, cross now, cross quickly, dont run.” These days, when I supervise my own students doing patrol, I am always slightly disappointed by their lack of panache.

The job of sick bay monitor was the best, especially if the bell had rung for a wet lunchtime. On such days, Sarah and I might accidentally slip in a puddle and rather than catch our death of cold, be obliged to change out of our own dreary attire and in to the sick bay’s new store-bought clothes. It seemed such a clever ruse.

But let me return to the tale of our most daring escapade.

In 1981, part of Campbells Bay School was bordered by bush. It was ‘out of bounds’ and as such we knew it was dangerous and mysterious.

I can now divulge that I, Alexandra and my best friend Sarah did one day take a box of matches and a can of Watties Baked Beans to school and during lunch break enter the ‘out of bounds’ area. Away from prying eyes we lit a fire. As a safety measure we did this next to a stream. We punched a few holes in the aforementioned can and placed it in the flames.

After some time we managed to slightly warm the tin to a point where the sauce surrounding the beans was not cold and opened it. I can report that eating those near cold beans was the most deliciously, naughty thing Sarah and I had done in our entire lives.

Afterward, with great stealth we re-entered the school playground and just before the bell seemlessly joined in a softball game. Until this day our secret adventure has remained a highlight of my education.

John McGowan was principal of Campbells Bay School for more than 20 years and is temporarily back at the helm for a few months as Acting Principal. The school he leads is very different from that of 1981.

Around 1000 students fill the vastly expanded plant and they are much more heterogeneous than 40 years ago, when you could list the non-Pākehā students on the fingers of one hand. Since the 1990s, Campbells Bay has seen waves of new settlers from South Africa, the United Kingdom and Asia, all drawn to the bustling, wealthy suburb by the sea. Until this year it hosted a number of international students, mostly from China and Korea.

While the school grounds are more populated, the bush has remained. In 2000, as part of the school’s 75th Jubilee, the Board began a project to turn the two acre bush into a thriving nature reserve. Now there are boardwalks, threaded through well tended native forest, that attracts birds and other fauna.  It is a valuable part of the local curriculum.

McGowan chuckles when he hears the tale of the 1981 fire.

“Some things don’t really change,” he says. “About seven or eight years ago we had a fire that was a result of students using matches inappropriately. Children’s fascination with fire is a constant over generations.”

He says that the days of the distant, terrifying principal are long gone.

“Principals and teachers are much more approachable and human than they once were,” he says. “I tell our international sutdents that they will probably find our school much less formal than what they are used to. The friendly relationships with teachers and principal are key to that. Most of the overseas students lap up the informality.” 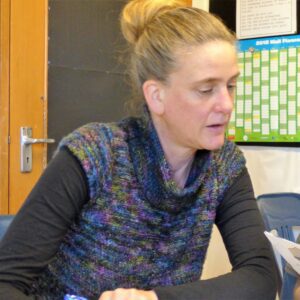