When we think about diversity, and who we mean when we talk about diverse people, it depends a lot on who and what we think of as normal.

Normal is one of those very powerful words that can be used to bring some people in and push other people out. Normal can be used as a synonym for typical, average, expected. It also often has moral overtones: what is right, healthy, appropriate. Deciding who and what is normal also involves power: people and groups in powerful positions determine who and what is typical, appropriate, acceptable. Decisions about what is normal, and who can decide, are contested and debated, often initiated by members of excluded groups.

Thinking about what is normal has changed over time and place. Some examples of changes in thinking about what was normal include: boys were educated and girls were not; all students lived in families with two parents, one male and one female; values, beliefs and practices common in some parts of the western world were assumed to be shared by all, desired by all.

From the perspective of those members of the groups considered normal, everything was working well (also called “privilege”). From the perspective of those members of groups not considered normal, there could be a number of consequences such as pressure to change and “fit in”, subtle or active exclusion, being defined as unworthy, uneducable, unwanted, and being blamed for the consequences of not being the same.

Diverse means varied. Occasionally we might hear “diverse” being interpreted as “not normal” – something along the lines of (according to any particular group) “not (normal) like us”. When we are talking about, thinking of, planning for diverse people, we are talking about all of us. We are talking about all of our diverse languages, cultural values, religions, abilities, interests, genders, sexualities, family configurations, socioeconomic status, how long we’ve lived in Aotearoa, ways of making sense of the world and so on. In our early childhood centres, schools, classrooms, playgrounds, communities we are the diverse students, teachers, families, neighbours, colleagues.

The challenges and opportunities for our current education system require growing a workforce (including teacher education and education support services) that better resembles the diversities in our communities, neighbourhoods and schools. We can choose to shift the focus from managing diversity to understanding and learning from our diversities.

Imagine arriving at a centre or school (as a new student, family or member of staff) and realising that something about you (your religion, language, sexuality) is being managed. This is a very different feeling to being welcomed, supported and feeling part of the team. While not wishing to minimise the complexity of living and working in our diverse communities, how we frame what we are doing shapes our responses to our fellow travellers.

Missy Morton is Professor of Disability Studies and Inclusive Education, Faculty of Education and Social Work, University of Auckland. 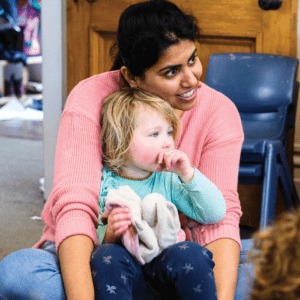 Inclusivity in ECE is increasingly seen as an opportunity to improve teaching practices and engage children’s learning.