“Everyone has something to say, but it depends on being able to communicate ideas,” says Dee Caswell, head kaiako at Rachel Reynolds Kindergarten in South Dunedin. “It’s only through the words that children know and use that they’re able to think, have ideas and make sense of their world and their lives.”

Oral language learning is a focus at the kindergarten, and research links it to success in school and later life. But research also suggests only 19 percent of early learning services in New Zealand have been “well focussed” on supporting oral language development.

Caswell says the kindergarten’s practices changed after its philosophy was reviewed. “We talked to every family and the response to one question, “What is important to you?’, stood out. Really strongly, the answer was ‘reading and writing’.”

This challenged the kindergarten’s existing teaching philosophy and led to its focus on oral language learning, which will enable children to meet whānau aspirations.

“It’s about children knowing they have a voice, and having it heard – even our non-verbal children and our non-English speakers,” says Caswell. The children, aged two to five, come from diverse backgrounds, including Tongan, Tuvaluan, Indian, Māori, Pākehā, Cook Island Māori and Fijian.

“It’s about children knowing they have a voice, and having it heard – even our non-verbal children and our non-English speakers.”

“It’s a matter of working out what the child is saying and going from there. It means [observing] body language, eye movement, gestures, seeing what routines they’ve developed. It might be asking the parent, ‘When the child does this, what does it mean?’”

It’s about working closely with families. “Whānau know their children best,” Caswell says. “A child may speak very little at kindergarten, but the parent will tell you, ‘They never stop at home.’”

The whānau room “wasn’t used much”, so has been turned into a library for reading. “Children have to hear words so many times before they can absorb and use them in context,” says Caswell. “Sharing at least three books a day with a young child helps in them hearing words and learning new words.”

Children read aloud too – that is, they stand in front of their peers and talk about the stories and pictures in their profile books. Sometimes they do this with their favourite books from home, too.

The kindergarten has a Lilliput Library (a book-swap scheme) at its front gate and the children are responsible for it. They take turns at wearing the lanyard and being the kaitiaki (guardian).

Kaiako also act like sensitive radars to children’s speech. “Children might be sitting in the sandpit talking and working things out – we won’t speak, we won’t impose. But we might get the broom and sweep the path alongside so we can listen. Then we can say to a parent, ‘Do you notice this or that about your child’s speech?’ If they also have concerns, then it’s time to intervene.”

Caswell believes in putting a child on the waiting list for speech-language services as soon as possible, because the list is so long. The issue might resolve and the child can drop off the list, but if it doesn’t resolve they will get help faster.

She worries that some parents can be reluctant to get help because of the fear of “getting a label”, but she works hard to make the process positive.

Social language is important too. “A child might ask another child if they can play with them, and the other child’s automatic response is, ‘No’. So we say to the first child, ‘Ask the other child what they’re doing’, and then they’re off.”

Caswell says it’s about supplying language and asking questions – “How did that make you feel? Could you tell them how it made you feel?” – so children learn how to be social beings. Sometimes it’s enough for an older child to be supported to explain the social problem they’re facing and then they can work it out for themselves.

“Exposure is not enough. The environment in which children are situated as they ‘action’ their day needs to be conversational and to involve them,” she says. “A baby, toddler and child has an immense capacity to learn. But having language optimally available to them is critical to ‘wire and fire’ their brain neurons and synapses. Language is the means to shaping their capabilities. Deliberate and scaffolded language moments are the key.”

A child is born with unique gifts and a unique capacity to learn, van Hees says, but mostly a brain is shaped by the child’s environment. “It’s not a question of some children being born clever and some not – language that is accessible and that involves the child is the meaning- and capability-maker.”

Interacting with others day-to-day offers a child reasoning, logic, description, “on-the-spot” explanations, relationship-building and socialisation capability, negotiation capability and resilience – learning to cope with the cut and thrust of communicating and being “of and in community.”

Van Hees explains, “Overdosing on devices takes away these important developmental learnings. People might think language is available, for example, when a child is on an iPad, but unless children are exchanging meaningfully with ‘real’ people, interacting with others, language uptake is minimal.”

“Unless children are exchanging meaningfully with ‘real’ people, interacting with others, language uptake is minimal.”

There is a sense in the sector that teachers’ concerns about the poor oral language of younger children in some settings have been swept under the
carpet. The politics of the rapid commercialisation of early childhood services, the smorgasbord of teacher training and a reluctance to panic parents have all been put forward as reasons for this, although various government-sector reports have hinted at the problem. According to a 2015
Education Review Office report, “Early childhood services gave priority to establishing warm and nurturing relationships with infants and toddlers and had less emphasis on communication and exploration”. A 2017 report, Extending their language – expanding their world, which was partially informed by van Hees’ research, has specific and detailed advice for services5.

Also in 2017, the Ministry of Education launched its Oral Language and Literacy initiative (OLLi), a pilot programme that has been rolled out to 442 centres that meet eligibility criteria. A review of the pilot has been positive, and it is likely to be rolled out further. The ministry is working with Te Kōhanga Reo Trust on a related programme for te reo-led services.

For the small, rural Marton Junction Community Preschool, near Whanganui, OLLi has been transformative. The centre has a roll of 80 percent Māori and Samoan students, along with Tongan, Fijian-Indian and Pākehā tamariki. Many parents work at one of the two local meat works.

“The increase in language has been huge with tamariki and their curiosity towards learning new words. They want to tell their stories and find names in written text,” says kaiako Nithuainia Lowrie. She is hugely enthusiastic about the programme, as as is head teacher Karen Kennedy.

For a fees-free community preschool, completing OLLi required whānau support. Families agreed to pick up their children early once a fortnight so the two teachers could get to Palmerston North for workshops with a speech language therapist. The workshops ran for six months from the start of 2019 and were followed up by three videoed sessions at the centre, after which kaiako practices were critiqued.

“It was so intense,” says Kennedy, who’s 66 and began her training in ECE in 2012 after hearing a talk on child brain development. She’d previously been a nurse. “Each fortnight there was a new element to incorporate into our practice. But it’s been amazing. We’ve decided to make the programme the basis for our review. We’ll revisit each element over the next three years.”

One of the biggest differences at the centre is in how, when and what kaiako and whānau read with children.

“We’re much more critical in purchasing and choosing books to put on the shelves for children – in particular, do the words and pictures match? We used to read to the children. Now, we open the book and ask the children to tell us about it,” says Kennedy.

“So many ideas and words and conversations are coming from tamariki. And this travels to home – it’s a complete reversal of the way we did things.”

“So many ideas and words and conversations are coming from tamariki. And this travels to home – it’s a complete reversal of the way we did things.”

Alicia Ingley is the parent of three-year-old Luca, who attends the centre, and she agrees that OLLi has been transformative. “After being involved in OLLi, Luca has been mentioning the ‘filling my bucket’ book at home.” This book, Have You Filled a Bucket Today? A Guide to Daily Happiness for Kids, has been integral to the centre’s OLLi work. “Luca will tell me he is going to fill my bucket by helping me at home. He also tells me when his brother is being unkind and not filling his bucket! Luca has seemed more interested in reading books to himself at home and will mimic his teachers from preschool by asking me questions about the pictures.”

The centre has also adopted best practice from research that supports the speaking of first languages at home. “Tamariki will pick up English here, but it’s better to speak their home languages at home,” says Kennedy. “This is a key to bilingualism – and that has many advantages for tamariki.”

Some children attend a regular session at the te reo Māori immersion class at their nearby school. “One Samoan family has decided to send their children there. They want to learn more languages. We’ve been amazed about where [OLLi has] taken us and everybody else.”

To literacy and beyond: Te Totara School

Michelle Simms, the librarian at Te Totara Primary School, talks about some of the ways she supports literacy at the school. 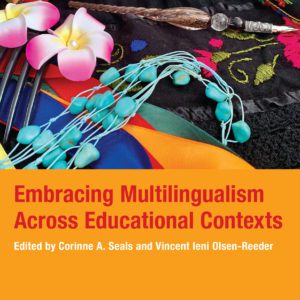 A review of Embracing Multilingualism Across Educational Contexts

The Professional Practice of Teaching in New Zealand (6th edition)